Friendship – Brown Bomber and the Black Uhlan of the Rhine 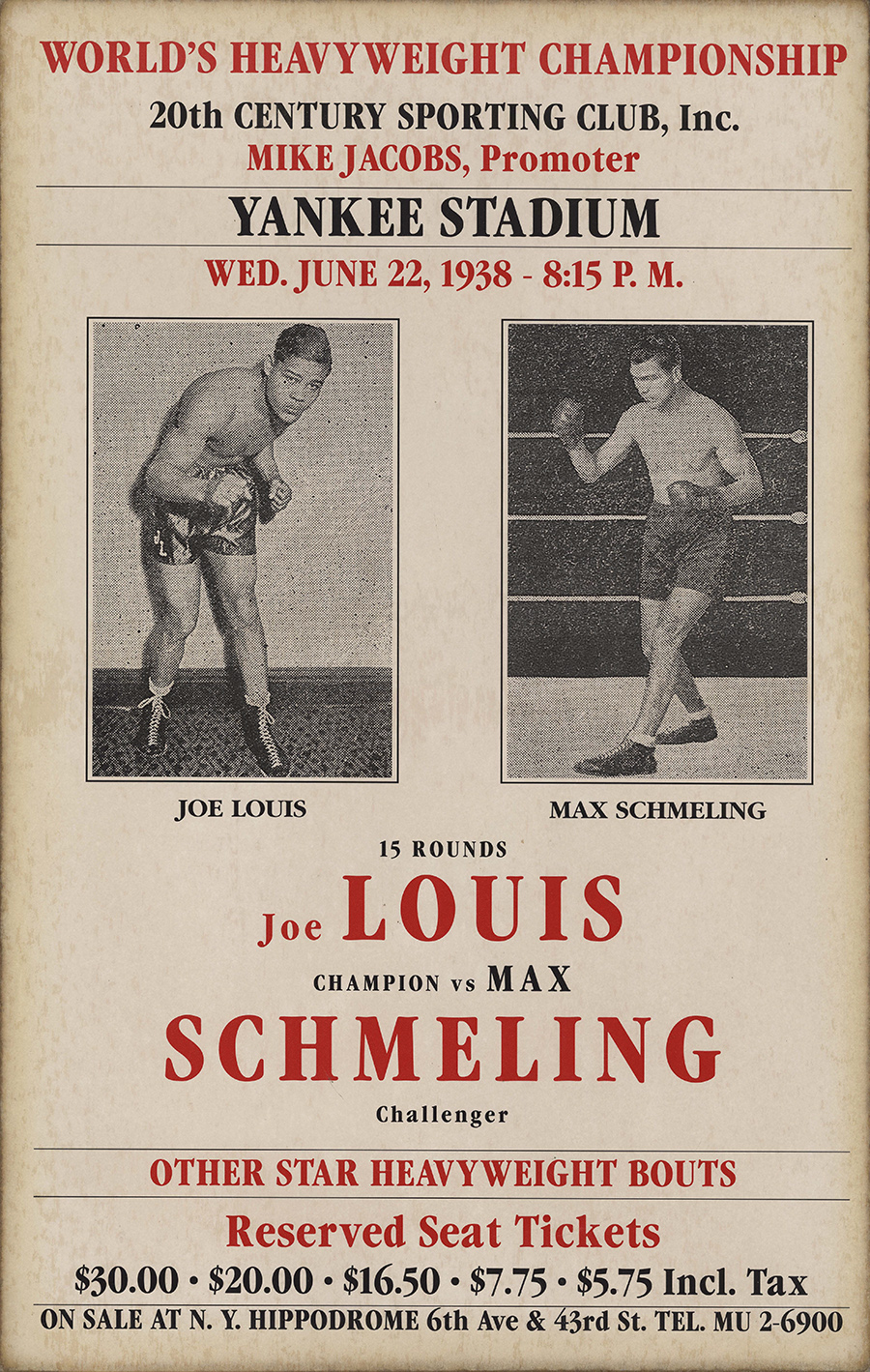 According to the dictionary it is defined as “a state of mutual trust and support between people.”

“… because of the friendship between our countries, we had a very frank exchange.”

This is a wonderful framing of two peoples’ relationship… Joe Louis and Max Schmeling.

Good vs. Good – Many Worlds – One Ring

I am very interested in acts of Friendship and how and why they occur, and how they inspire perseverance and prosperity, even in the face of…

Joe Louis was born in Alabama, but lived much of his early years in Detroit. As a successful African American professional in the northern part of the country, Louis was seen by many other Americans as a symbol of the liberated black man. Since becoming a professional heavyweight, Louis amassed a record of 24–0 and was considered invincible heading into his first bout with Schmeling in 1936. Louis’ celebrity was particularly important for African Americans of the era, who were not only suffering economically along with the rest of the country, but also were the targets of significant racially motivated violence, particularly in Southern states by members of the Ku Klux Klan. By the time of the Louis-Schmeling match, Schmeling was thought of as the final stepping stone to Louis’ eventual title bid.

Max Schmeling, on the other hand, was born in Germany, and he had become the first world heavyweight champion to win the title by a disqualification in 1930, against Jack Sharkey, another American. One year later, Schmeling retained his title by a Round 15 knockout against William Stribling. Later Schmeling lost the title in a rematch with Sharkey by a very controversial decision in 1932. As a result, Schmeling was well known to American boxing fans, and was still considered the No. 2 contender for James Braddock’s heavyweight title in 1936. Nevertheless, many boxing fans considered Schmeling, 30 years old by the time of his first match with Louis, to be on the decline and not a serious challenge for the Brown Bomber.

Perhaps as a result, Louis took training for the Schmeling fight none too seriously. Louis’ training retreat was at Lakewood, New Jersey, where Louis was introduced to the game of golf – later to become a lifelong passion. Louis spent significant time on the golf course rather than training. Conversely, Schmeling prepared intently for the bout. Schmeling had thoroughly studied Louis’s style, and believed he had found a weakness: Louis’s habit of dropping his left hand low after a jab.

Although the political aspect of the first Louis-Schmeling bout would later be dwarfed by the crucible of the later 1938 rematch, brewing political sentiment would inevitably attach itself to the fight. Adolf Hitler had become chancellor of Germany three years previously and, although the United States and Germany were not yet political or military enemies, there was some tension building among the two countries as the Nazi Party began asserting its pro-Aryan, anti-Jewish ideology. Schmeling’s Jewish manager, Joe Jacobs, set up Schmeling’s training at a Jewish resort in the Catskills, hoping it would help mollify Jewish fight fans.

These two men had the weight of the world on their shoulders, their individual cultures each viewed with disdain and distrust; both represented hope for their individual communities… Equality for the African American culture, and the “good Germans”… they found a common bond by embracing their commonality, and exploring their potential in a shared experience. 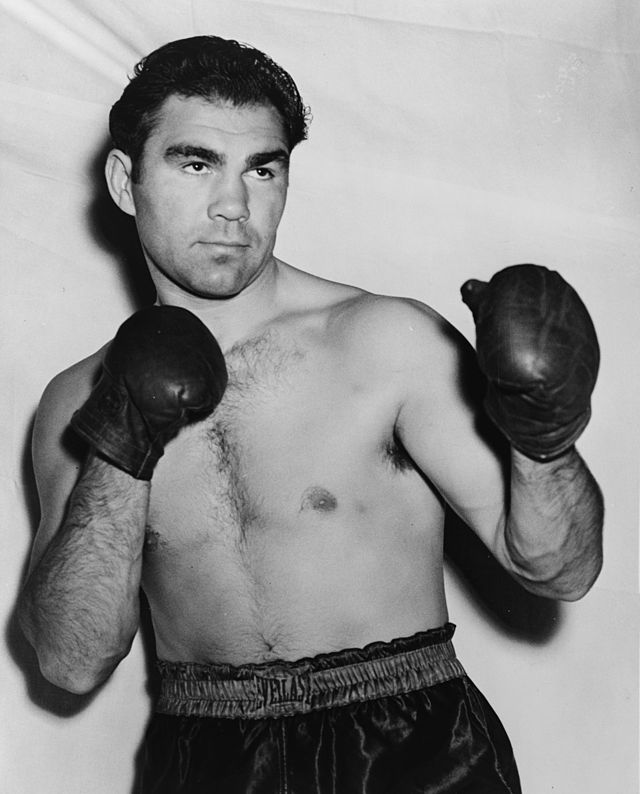 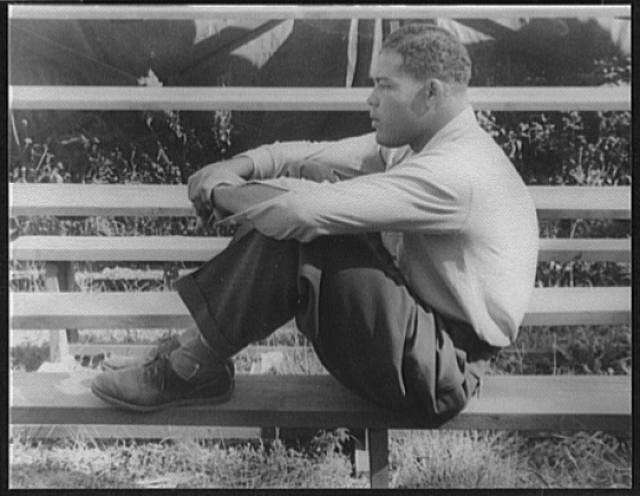 Their Friendship: fighting atrocity, fighting racism, and fighting each other was their way to Participate with Purpose

This journey of Participation with Joe and Max can be seen within Aristotle’s three types of Friendship, and the many acts of friendship between these two men:

First: Friendships of Utility – friendships based in mutual benefit.

Second: Friendships of Pleasure – friendships based in mutual interests and enjoyable companionship.

Third: Friendships of Virtue – friendships based in mutual appreciation of character, and mutually inspired to BE Better.

All three kinds of Friendship require some kind or level of respect to exist. The utility nature of Joe and Max’s friendship would be shown in the fact that each of them had profound respect for each other, especially by the time they went into the ring for the second fight in 1938. Both men prospered by their two fights. Max gained fame, influence, financial wealth and favor with the leadership (Nazi Party) at home in Germany after the first fight. And Joe became the hero for the American cause against the Germans in World War II. 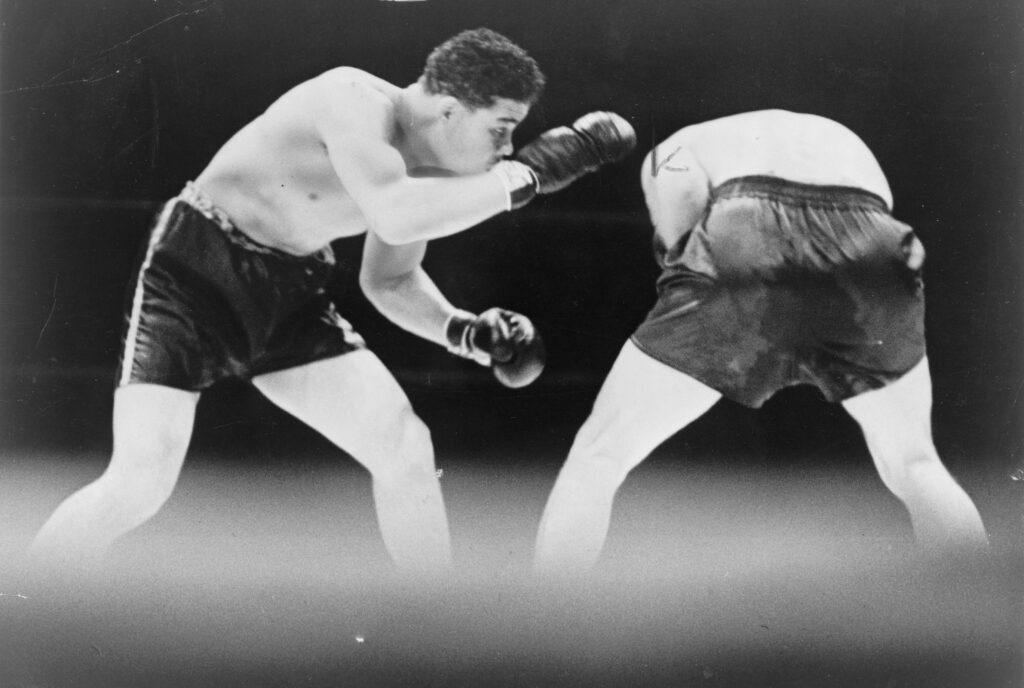 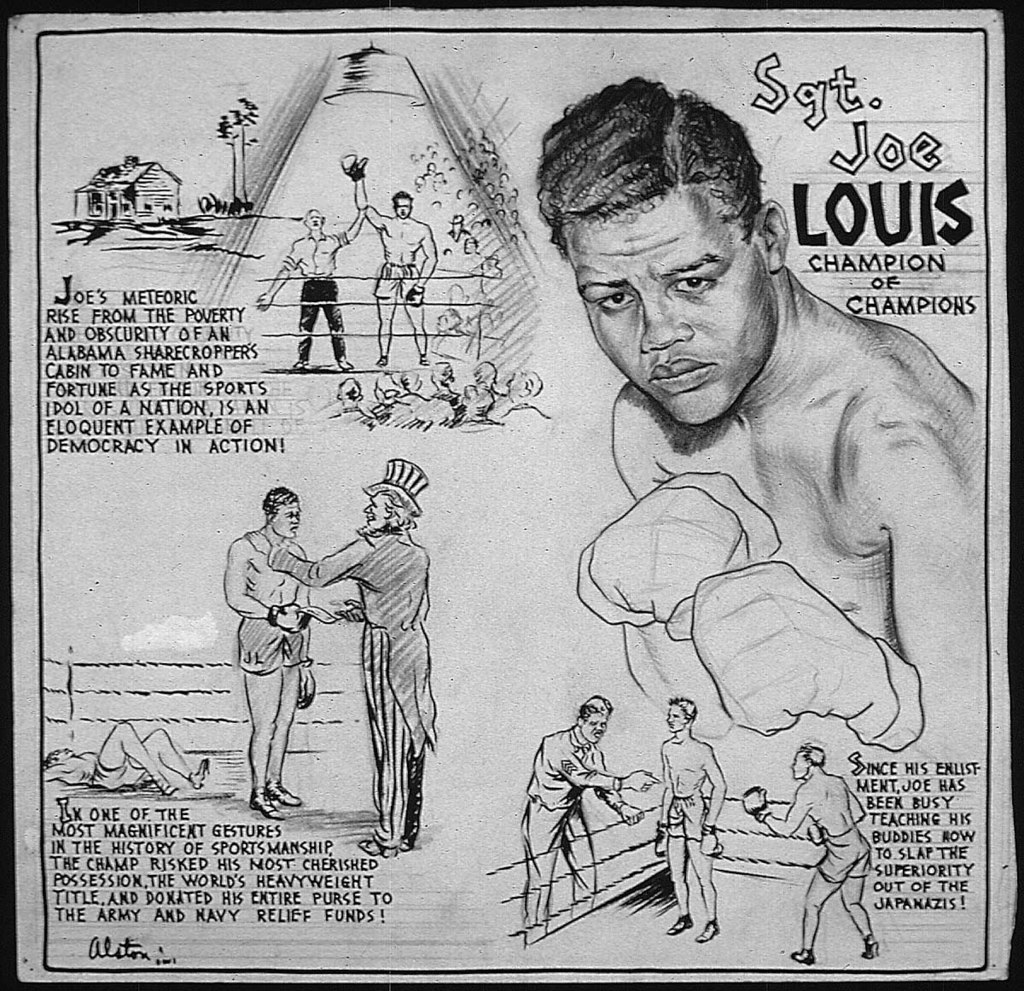 During the war both men held roles with their cultures and communities that made them uniquely invaluable.

Joe Louis was the literal embodiment of hero over the German nemesis. So when war was declared he volunteered and enlisted in the U.S. Army. He would spend his war enlistment traveling and doing boxing exhibitions with the Allied Soldiers in the European theatres to boost moral and inspire comradery. His propaganda value as the man (just a man) who defeated Hitler’s Nazi Champion Fighter in the first round was immeasurable, and used to the fullest degree possible.

Unknown to the general population of Allied nations, Max Schmeling had long been an opponent of the Nationalist movement in Germany, especially regarding their treatment of non-Aryans. His defeat of the great American black fighter in 1936 gave Max a level of influence not available to many people. The influence was of such high degree that he was able to negotiate directly with Hitler and his staff the safety of his agent’s Jewish wife… and also harbored 3 Jewish youth to assure their safety while their parent’s lives were in jeopardy – essentially, blatantly in the face of Nazi leadership. Max was punished by Hitler for his indiscretions by being sent to Paratrooper training (another long, but interesting story for a different time).

After the war Max traveled back to America to visit with Joe. He wanted to apologize for any indignities or inappropriateness Joe may have ever experienced because of Max. He wanted to make sure that Joe Louis knew he never felt about Joe as the Nazi’s felt and promoted him to be. Joe Louis told Max that he “never felt that way”, and that if he ever did feel that way, that he “no longer remembered it.”

This reconnection created a dear and powerful friendship that would last until Joe Louis’ death in 1981. So special was this friendship that Joe’s son has said that his father didn’t come off the golf course for his own son’s or daughter’s births, but he came off the course when Max Schmeling arrived unexpectedly at the Golf Club for a visit.

Their individual quests for excellence, success and prosperity brought these two men together. The Scope of their endeavors combined with their Limitless perspective on life made it possible for both of them to influence humanity and become true friends… based in Compassion, was their Friendship. 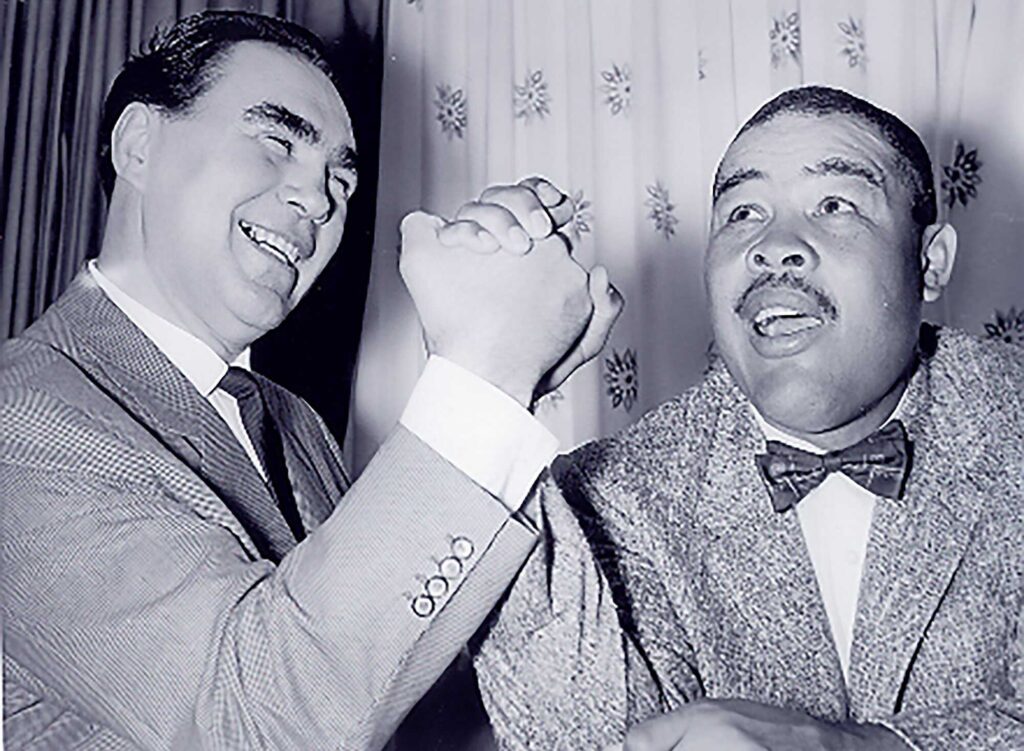 When I have the opportunity to learn about amazing, unexpected relationships – Compassion, Honor and Joy – my life is Better… always. Not just always in the sense of forever or enduring, but also in the sense of all ways possible. Friendships and the creation of them turns out to be the most important component to all Happy AND Successful lives.

Either way, I feel very privileged to learn about these people and how/what they did. Do you?

Share your thoughts on Friendship and what it means to you.

Maybe you could even share your favorite “unexpected” friendship, involving someone famous or not at all famous, as long as you are somehow inspired or touched by it.